Gary demonstrated the use of tools and techniques for making woodcuts, linocuts and collagraphs.

To find more out about Gary.

Anthea Boesenberg is a printmaker primarily concerned with surface and materiality. This has led her to explore alternative techniques and media, such as rusting, burning, encaustic, stitching, and cutting. The use of paper is a constant. She has moved almost entirely away from editioning, but continues to use printmaking processes in her work. Anthea will talk about her practice, and demonstrate Encaustic and paper (and perhaps some paper thread making if there is interest.) 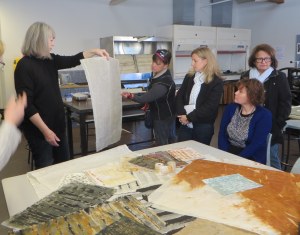 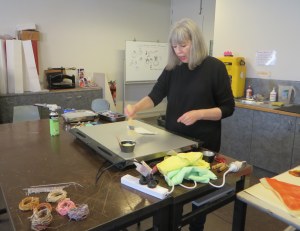 An introduction to traditional Japanese Woodblock Printing with a contemporary application.

This relief printing technique uses non-toxic studio practices and all cleaning is done with water. Students will learn the printing process with an emphasis on technique. Printing will be done by hand using the relief baren and oriental paper.

Day one will include a demonstration of carving techniques and the maintenance and sharpening of tools. Day two will focus on a discussion of the variety of oriental papers available, the effective use of the paper as well as the link between paper and process.

The tutor, Roslyn Kean, has studied at the Byam Shaw School of Art in London and undertaken a lectureship at the Slade School of Art, London. She has taught at the College of Fine Arts, University of NSW, Sydney and spent time in Japan as a research student looking at Traditional Japanese woodblock printing techniques while producing work as a contemporary artist.

Auguste finished his training at the George Baldessin Studio in 1976. He will be discussing and showing work from the Well House Press (named after an original convict built well on their property at 159 Paddington Street). It was here that many of the etchings were originally editioned in the late 70’s by the Blackman family company where aquatint and acid plate biting were done under the keen eye of Master Printer Satish Sharma. Satish is rarely acknowledged in Australia as he worked exclusively for the Boyd, Perceval and Blackman families in their private studios. Satish was a renowned printer at Galerie Maeght in Paris and editioned for many world famous artist such as Miro, Kandinsky, Calder and Giacometti just to name a few. The presentation will also include a presentation of Murambeena pottery, including works by Boyd,Perceval  and Blackman.

Susan gave a brief history of traditional Woodblock Printing “using water based pigments, referred to as Mokuhanga.”My approach to woodblock printing, images of my work as contemporary applications of Mokuhanga. A demonstration of a multi coloured print was done, together with an explanation of the suitable paper, wood, carving tools, brushes, baren, pigments and print registration“.(Susan Rushforth). 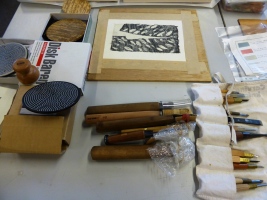 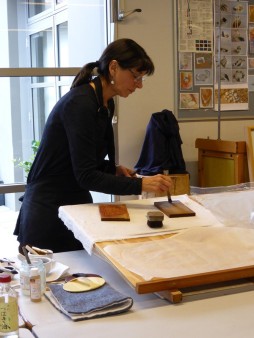 The British Museum in London has recently acquired a work by Tony Ameneiro from the found skull series. Selected as a finalist in this year’s Burnie Print Prize  the exhibition runs until Sunday 10th May 2015 The National Gallery of Australia (NGA) has acquired Tony Ameneiro’s large print “Big Night Skull”  2006, (179 x 90 cm) colour linocut  for its collection. The acquisition was put forward by Roger Butler, Senior Curator of Australian Prints, Drawings and Illustrated Books at NGA. To find out more about Tony. 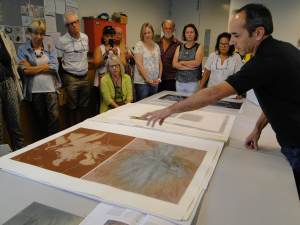 Postcard Exchange 2022: ‘Inside Out’ Entries close March 30 2021. If you are an overseas entrant please email us when you have sent your cards- so we can wait for them to arrive!

SPA will be exhibiting at the Milk Factory in Bowral in July 2022.

This site uses Akismet to reduce spam. Learn how your comment data is processed.